In accordance with MIT Policy 13.3: All records generated or received by the various administrative and academic offices of the Institute in the conduct of their business, regardless of the form in which they are created and maintained, are the property of the Institute and constitute archival material. Institute records are found in the Institute Archives and Special Collections and given an "AC" collection number.

The collection documents Howard Johnson's years as president of the Massachusetts Institute of Technology (MIT) and chairman of the MIT Corporation, over the period 1966 to 1983. (from finding aid) 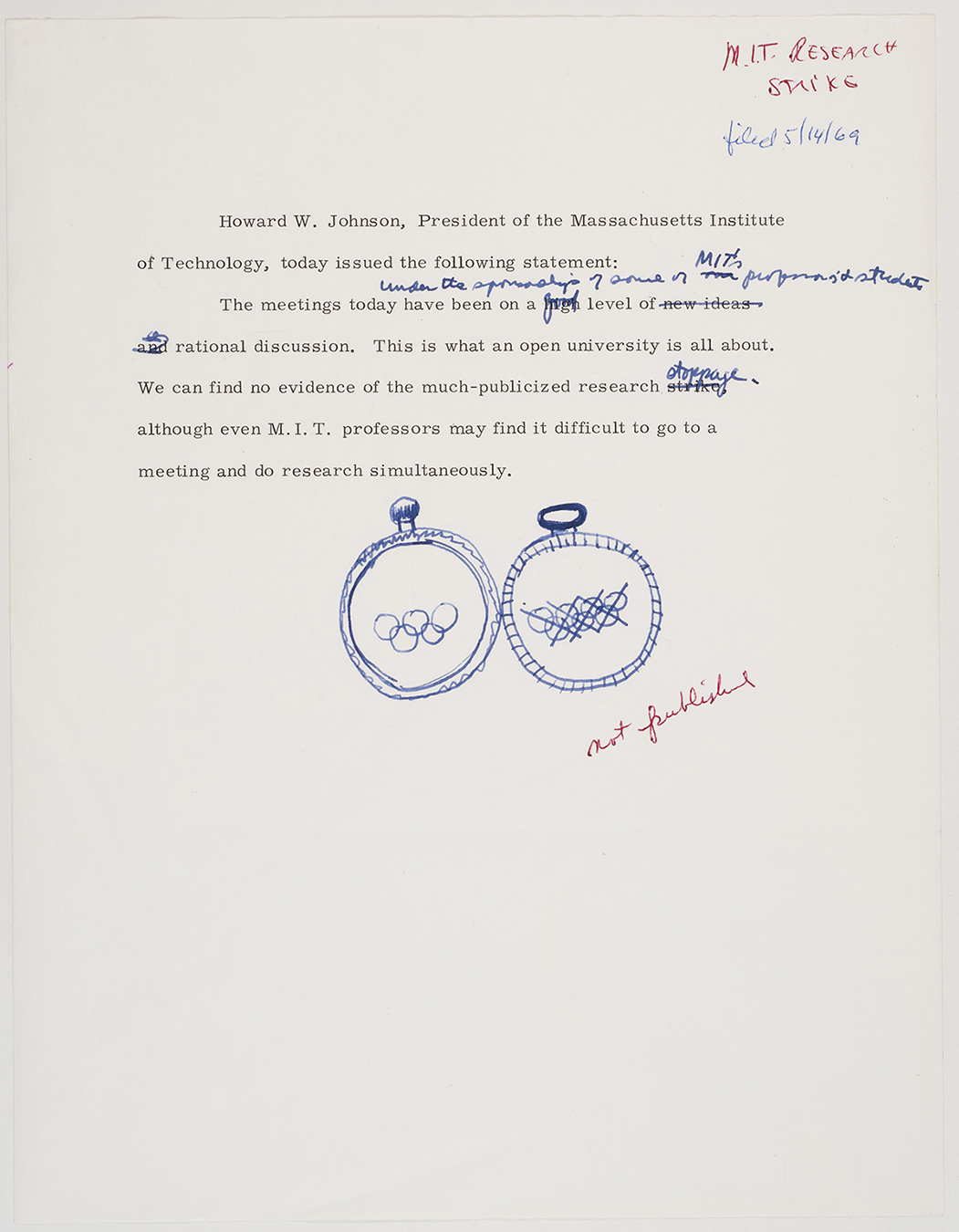 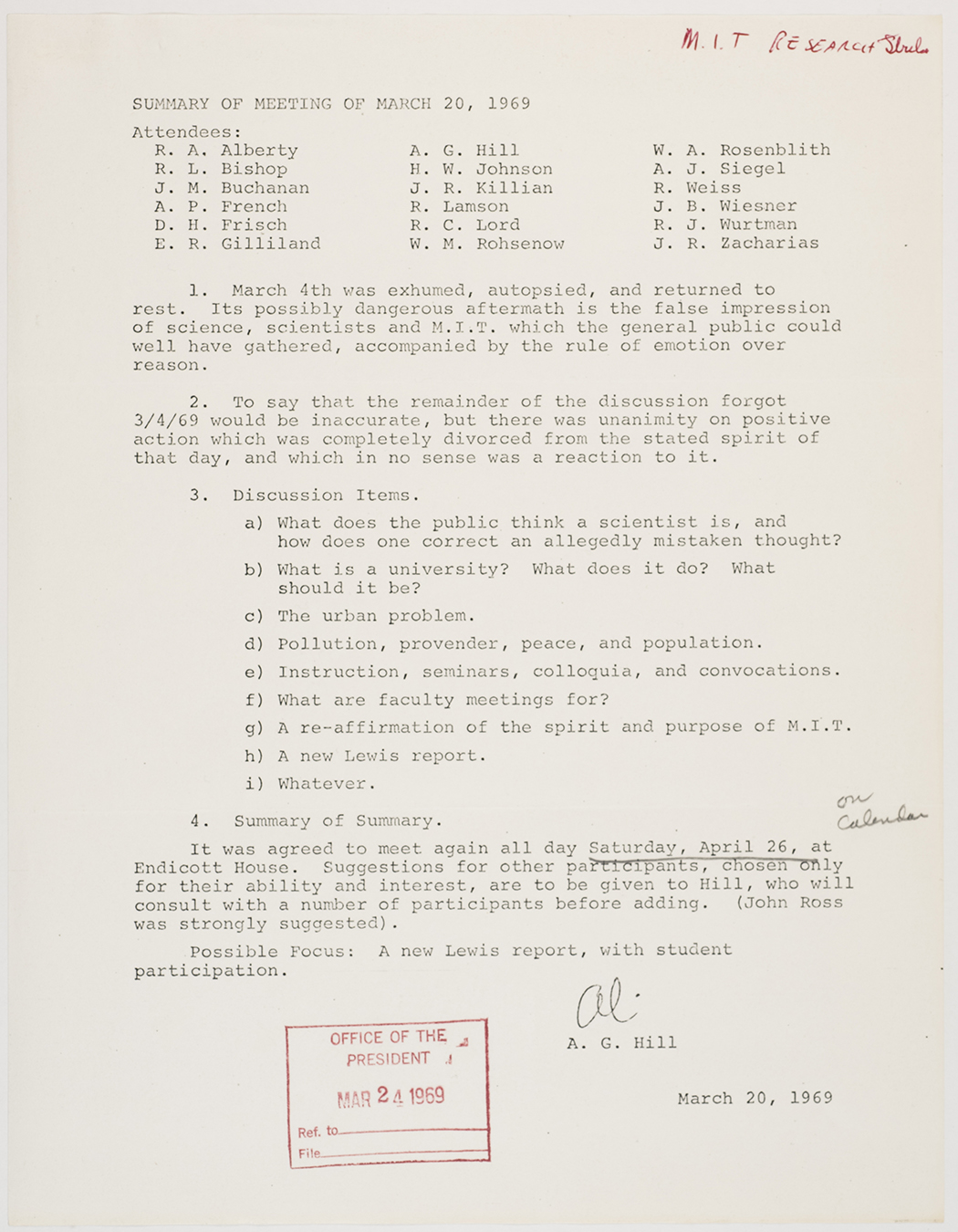 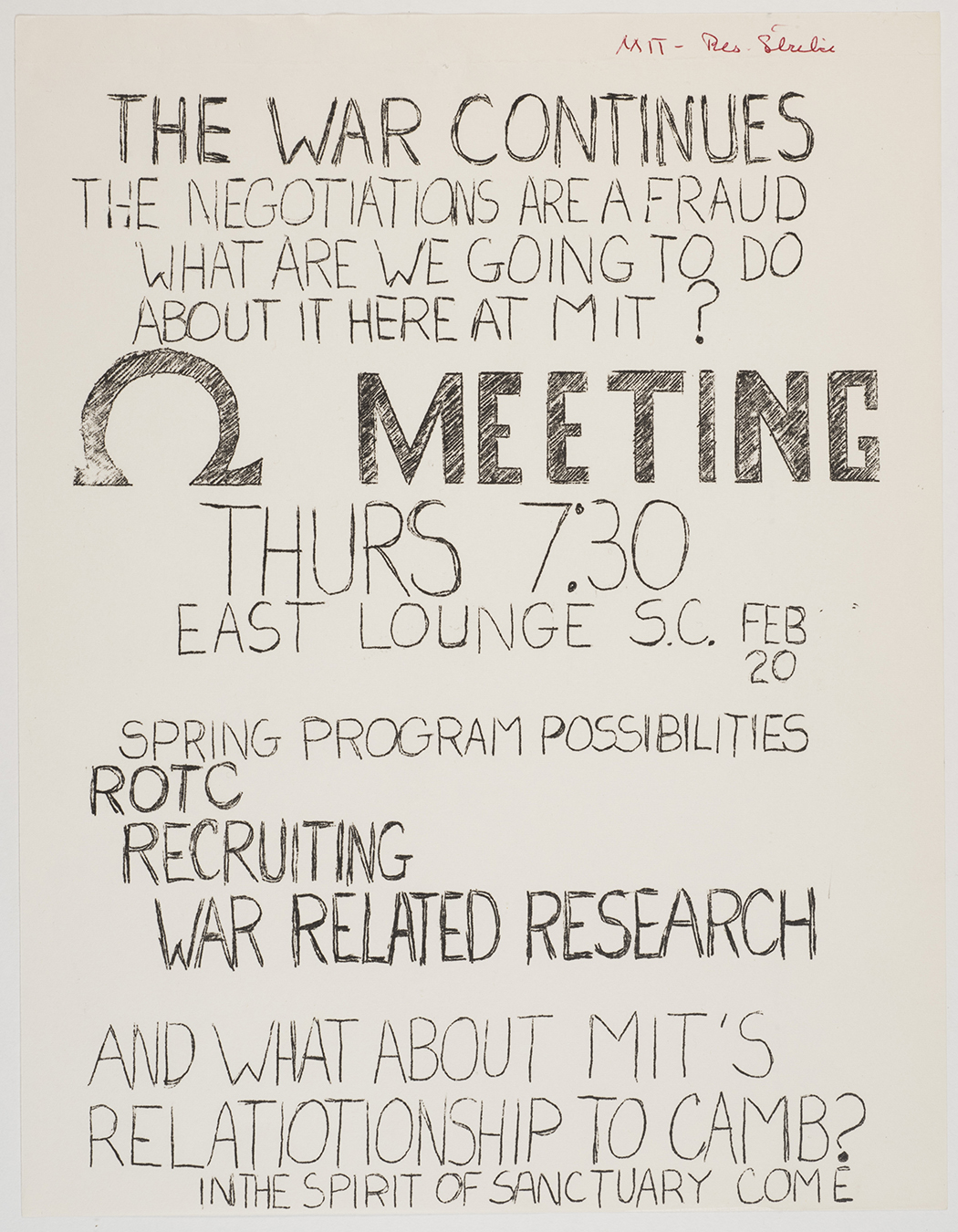 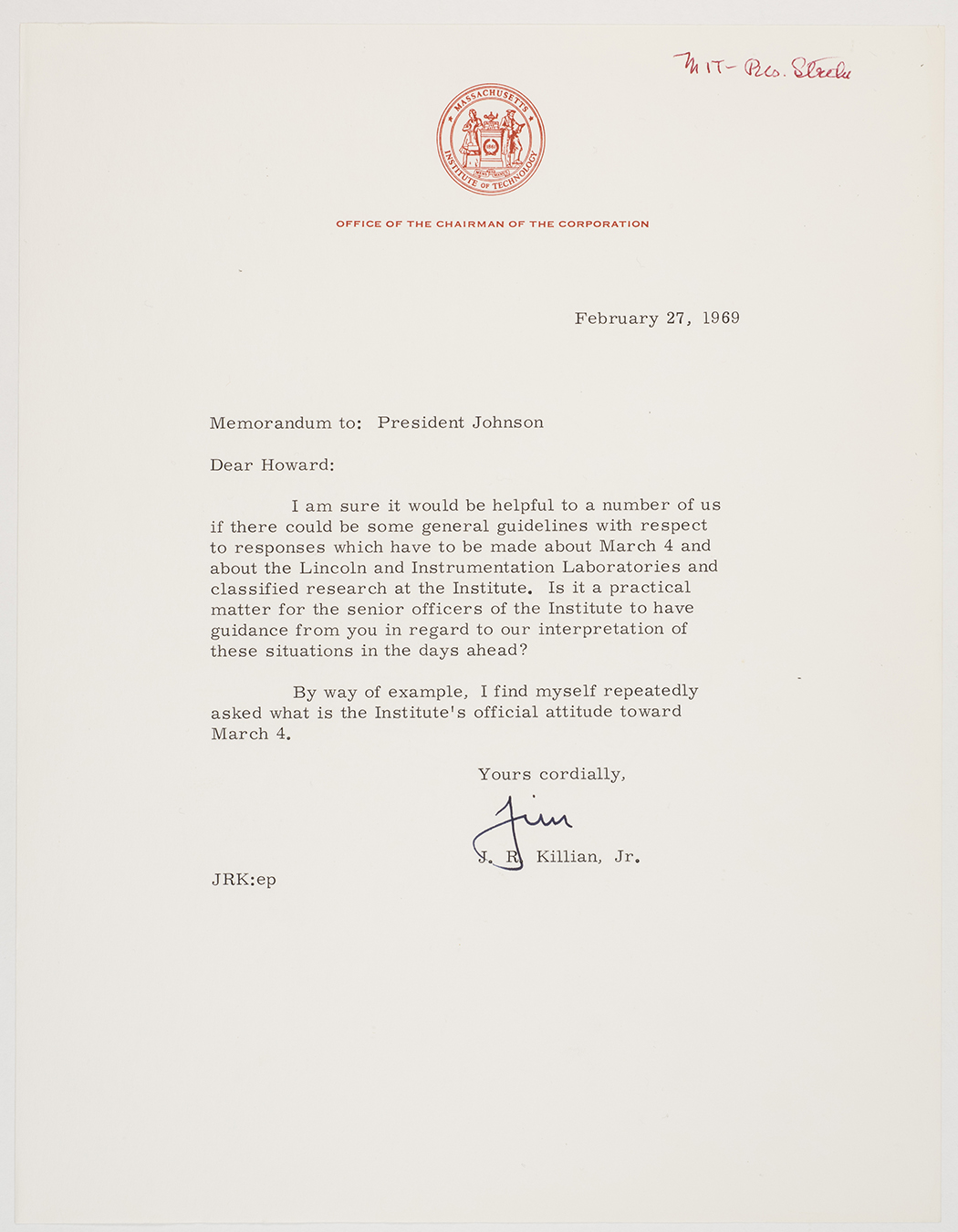 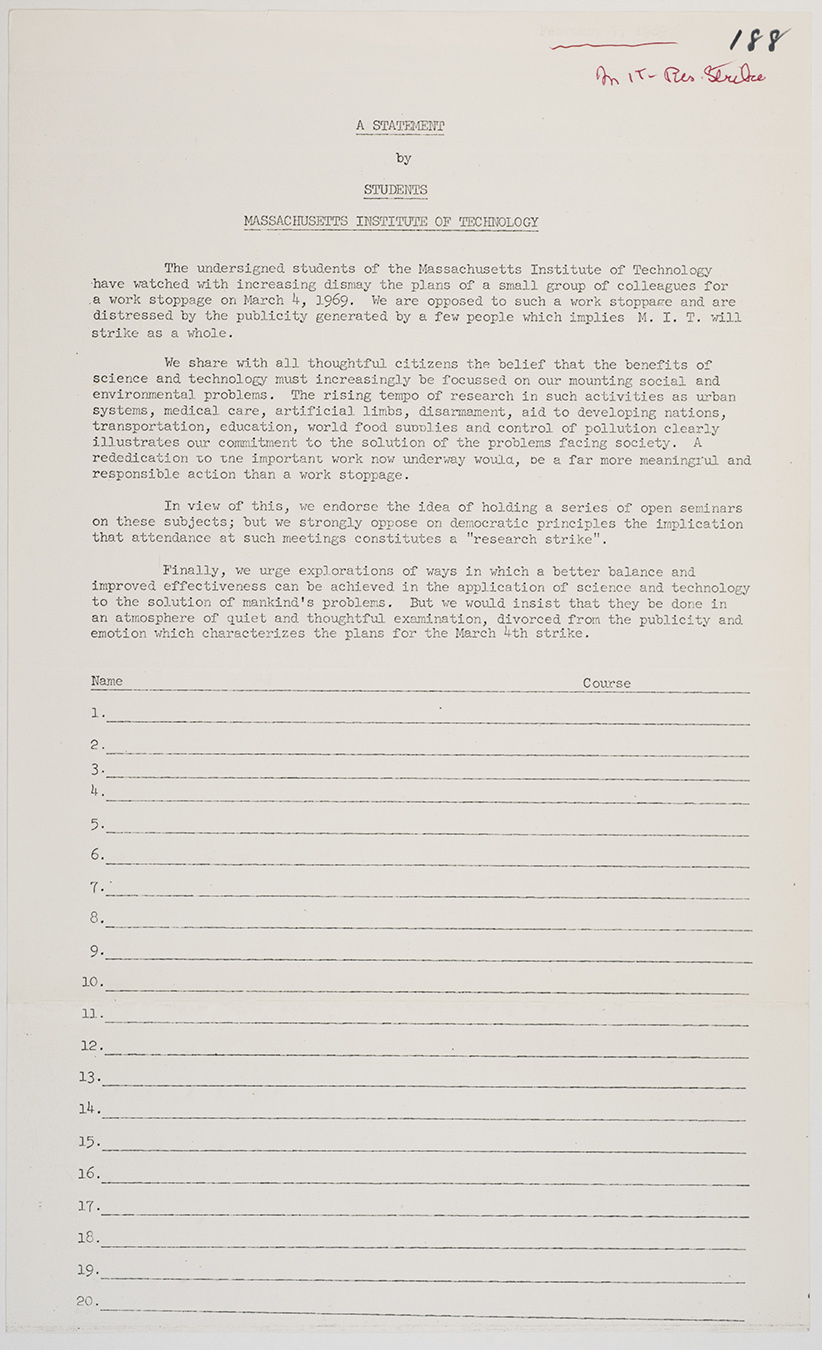 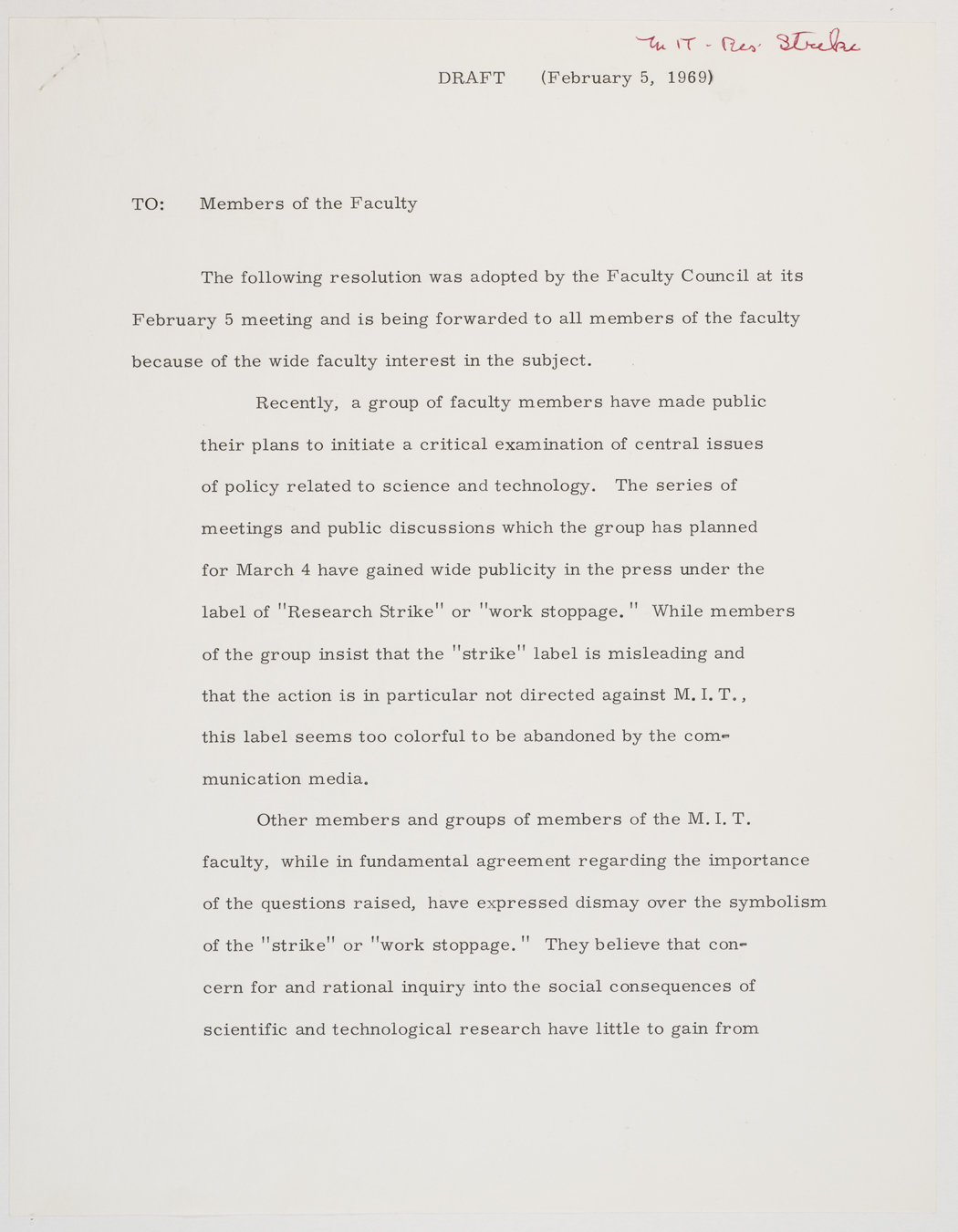 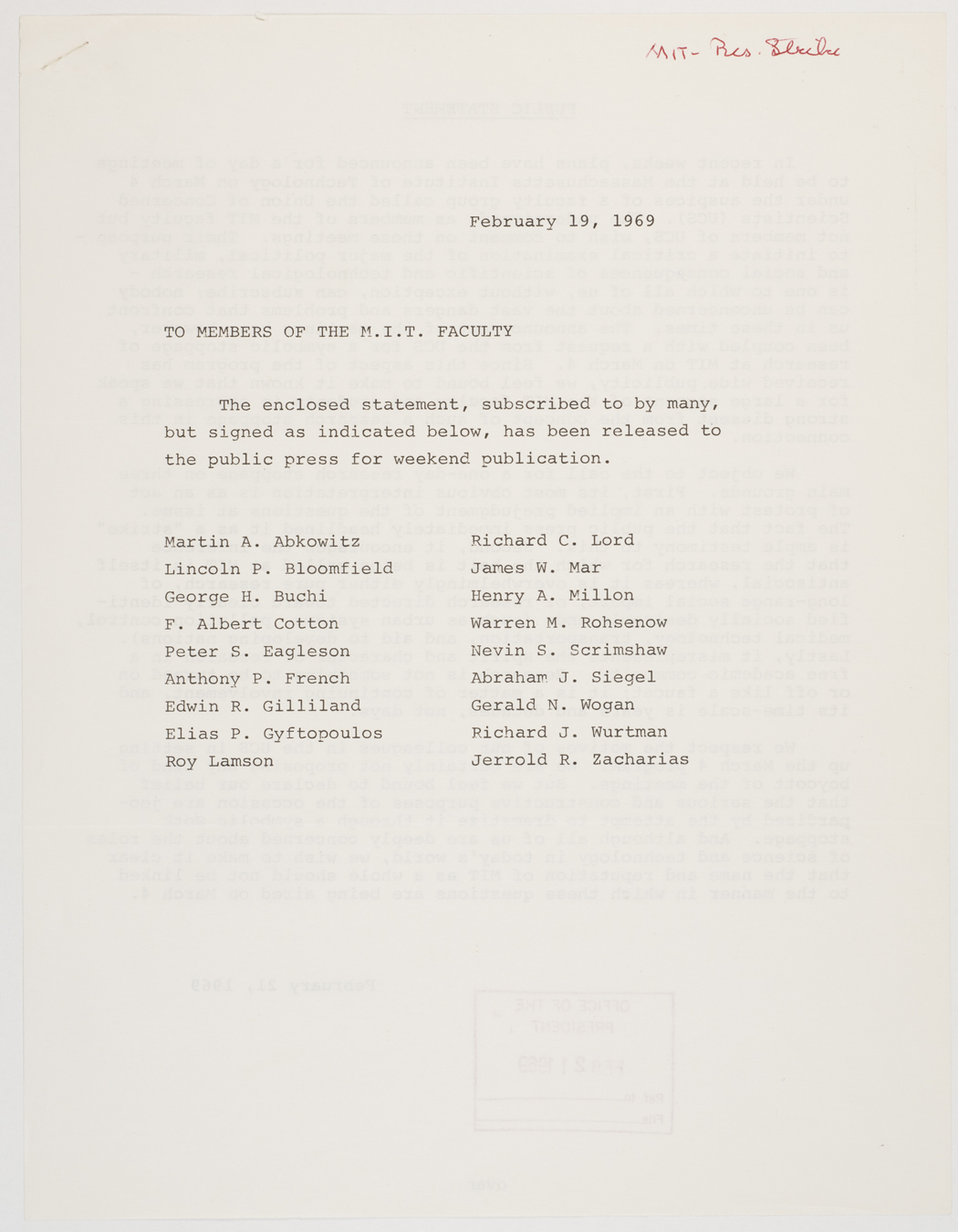 In 1939 James R. Killian, executive assistant to Massachusetts Institute of Technology president Karl T. Compton, established a budget and review committee, composed of deans of the schools, to improve cooperation and understanding between the faculty and administration. When Killian became president of MIT in 1949, he reorganized the committee into Academic Council to serve as an advisory body for academic policy. The president serves as chairman and the provost or chancellor as vice chairman; other members are the vice presidents, deans of the schools, academic deans, associate provosts, chair of the faculty, and director of libraries. At present (2011), Academic Council meets weekly to confer on matters of Institute academic policy. (from finding aid)

MIT, Office of the President and Chancellor, records of Jerome B. Wiesner (AC-0008)

The collection is composed primarily of records of the Massachusetts Institute of Technology. The dates of the records in the collection span from 1960 to 1984, though the bulk was created between 1966, when Wiesner was appointed provost, and 1980, when he retired as president of MIT. The collection also includes records created when Wiesner was director of MIT’s Research Laboratory of Electronics (1952-1960), dean of science (1964-1966), and provost (1966-1971). There are a few files from Wiesner’s tenure as Science Advisor to the President (John F. Kennedy and Lyndon B. Johnson) from 1961 through 1964. (from finding aid) 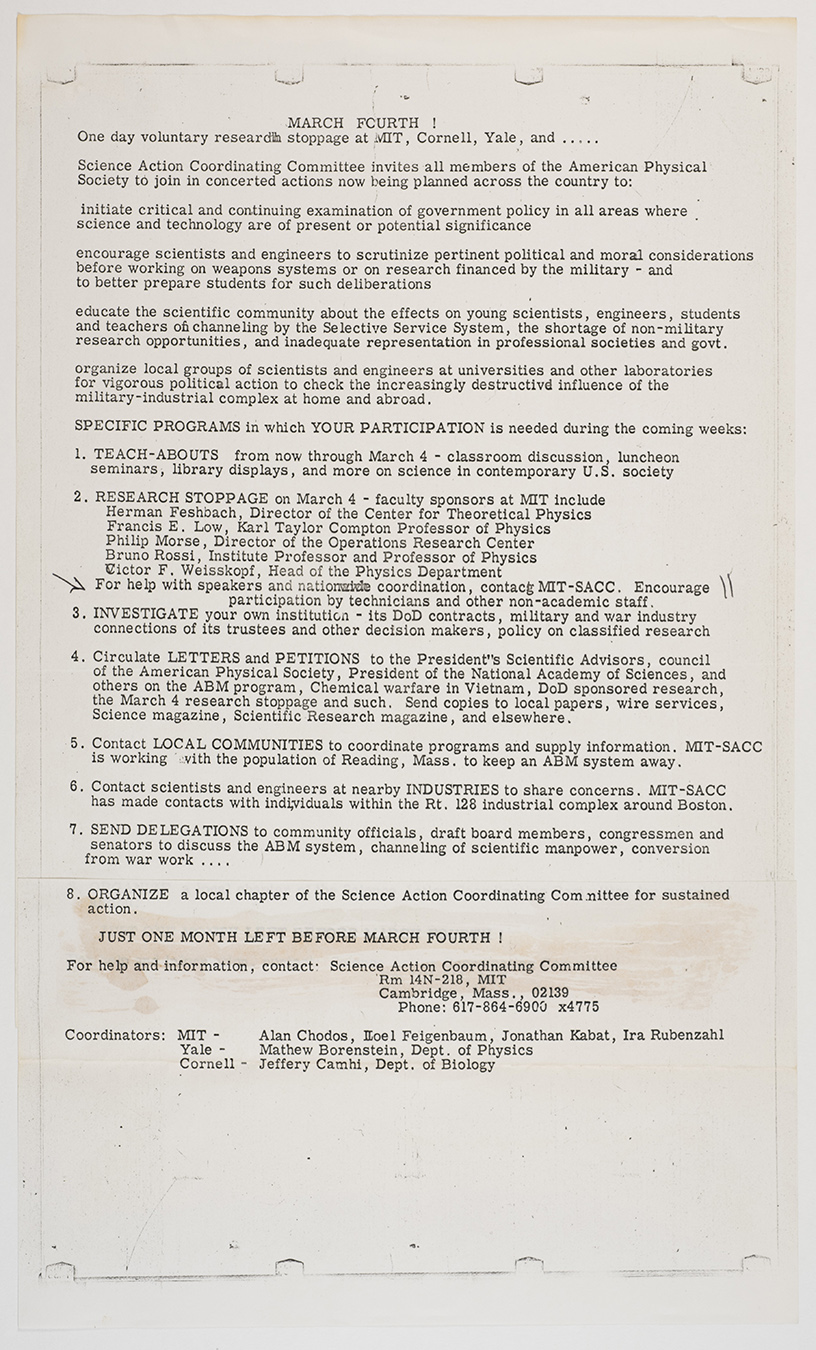 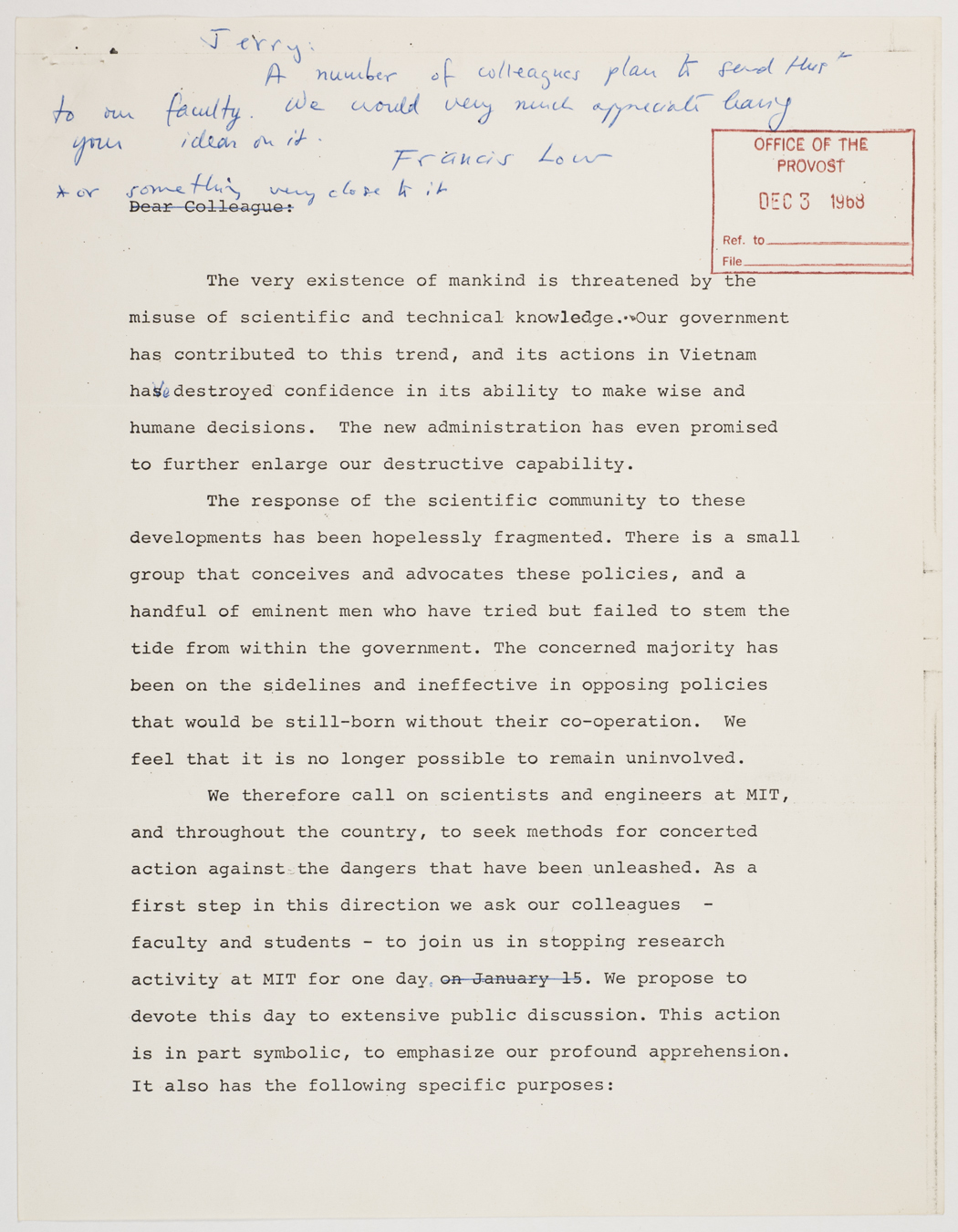 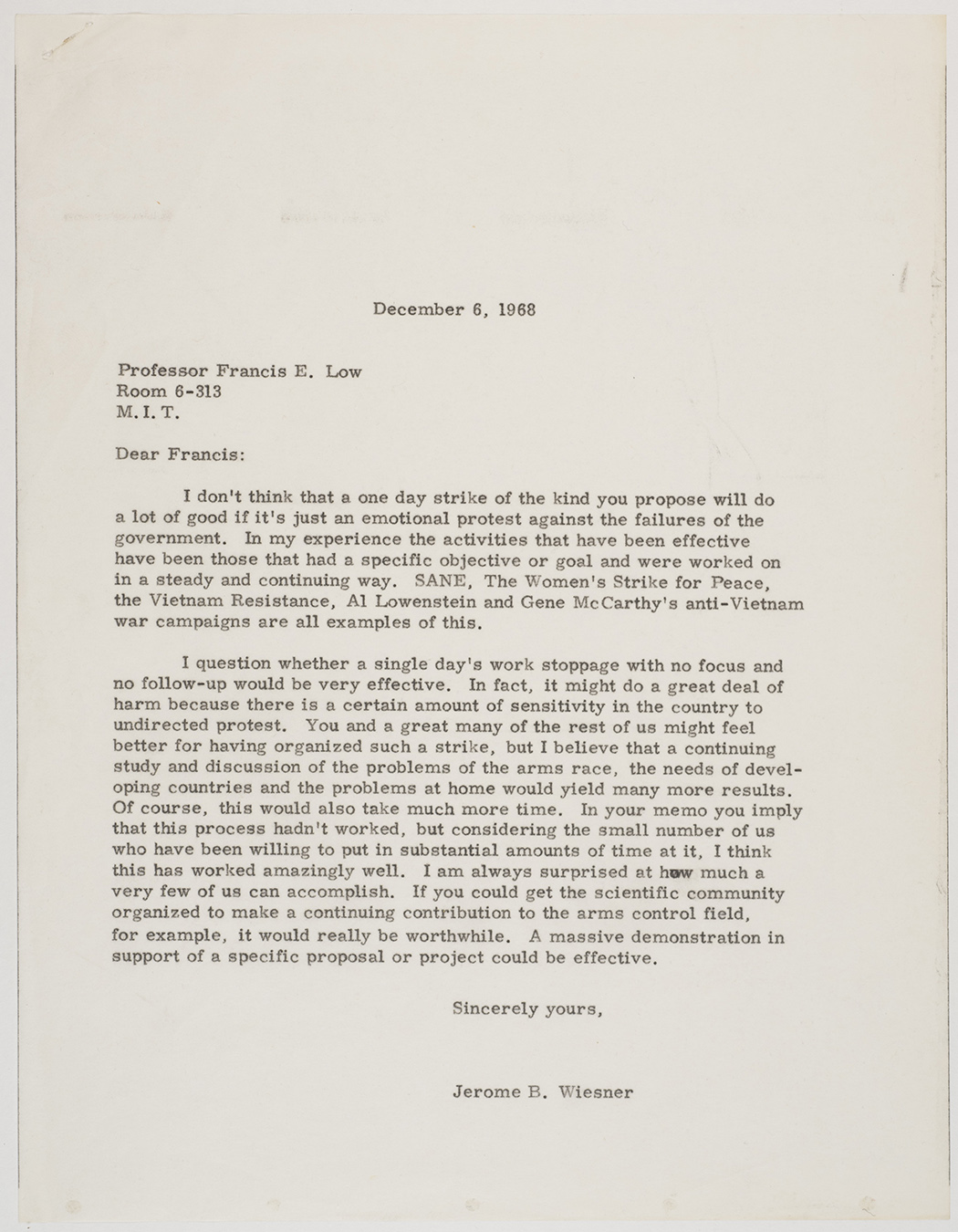 MIT, Office of the President, records of Vice President Constantine B. Simonides (AC-0276)

In 1966, Howard W. Johnson was elected president of MIT. Johnson appointed Simonides assistant to the president, a post Simonides held until 1970.

The records from this period reflect the MIT community’s response to the Vietnam War and to MIT’s relationship to the federal government, especially to the Department of Defense and the armed forces. As Johnson’s assistant, Simonides was a member of a group of faculty and administrators who worked to monitor and defuse potentially volatile political situations on campus during the late 1960s and early 1970s ; these efforts are documented through extensive clipping files (box 25, 27), photographs (Series VI, boxes 62-63), correspondence (boxes 29-30), and reports of eyewitnesses to campus events (box 29). (from finding aid)

MIT, School of Engineering, Office of the Dean records (AC-0012)

The Science Action Coordinating Committee (SACC) was founded in early 1969 by a small group of physics and biology graduate students at the Massachusetts Institute of Technology to work for radical economic and political change within MIT and the country through education and symbolic protest. SACC's members were undergraduate and graduate students; Noam Chomsky was the group's faculty advisor. Between 1969 and 1973 SACC participated in many anti-military research and anti-war protests. Together with the MIT faculty chapter of the Union of Concerned Scientists, SACC co-sponsored a research work stoppage and teach-in on March 4, 1969, to "devise a means for turning the application of research from military uses and toward the solution of environmental and social problems." Late in 1970 SACC changed its name to the Social Action Coordinating Committee and became involved in a broader range of causes, including local tenants' issues, workers' job actions, preventing the deportation of Vietnamese students at MIT, and opposing the training of Iranian nuclear engineers. SACC ceased in 1977. (from finding aid) 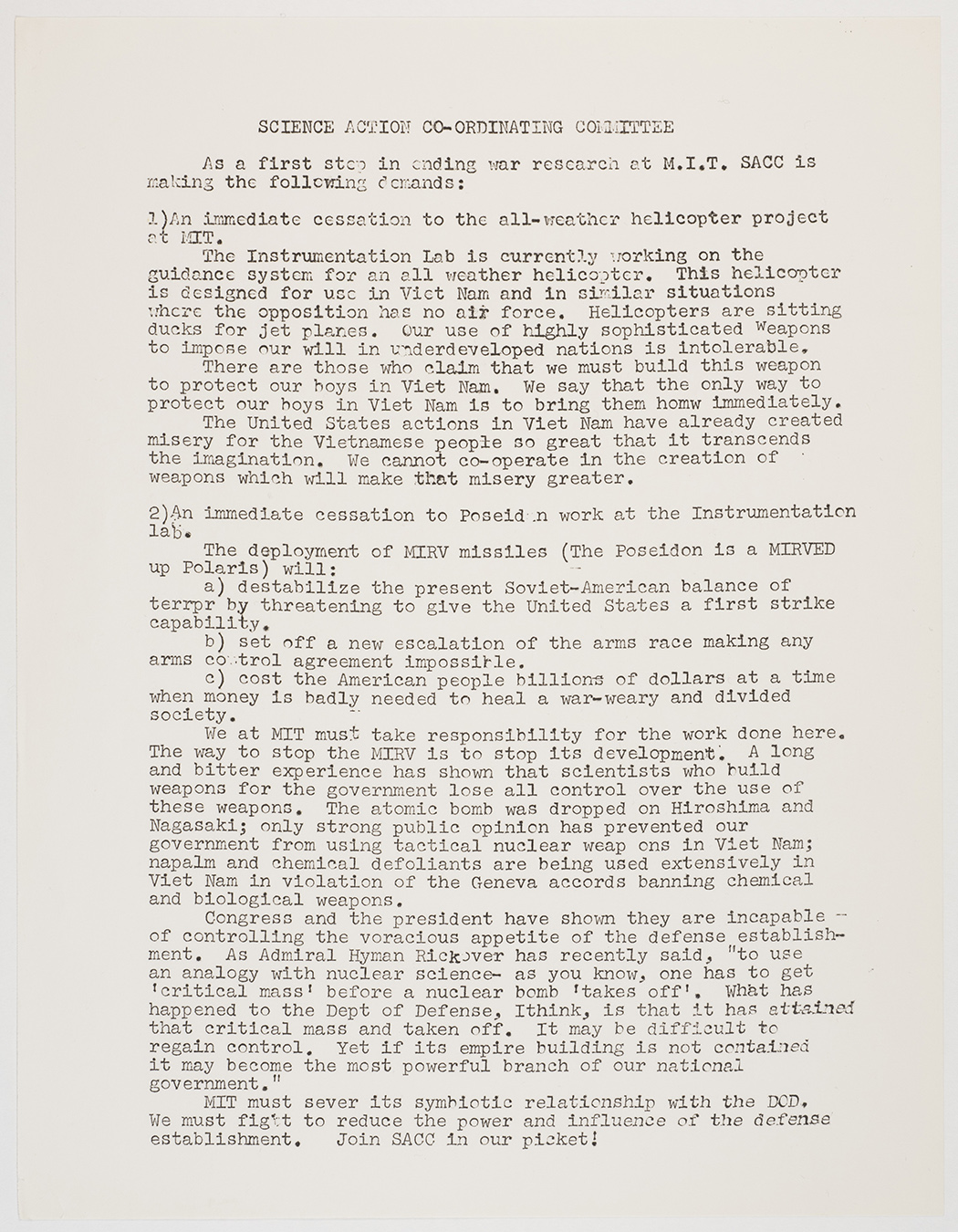 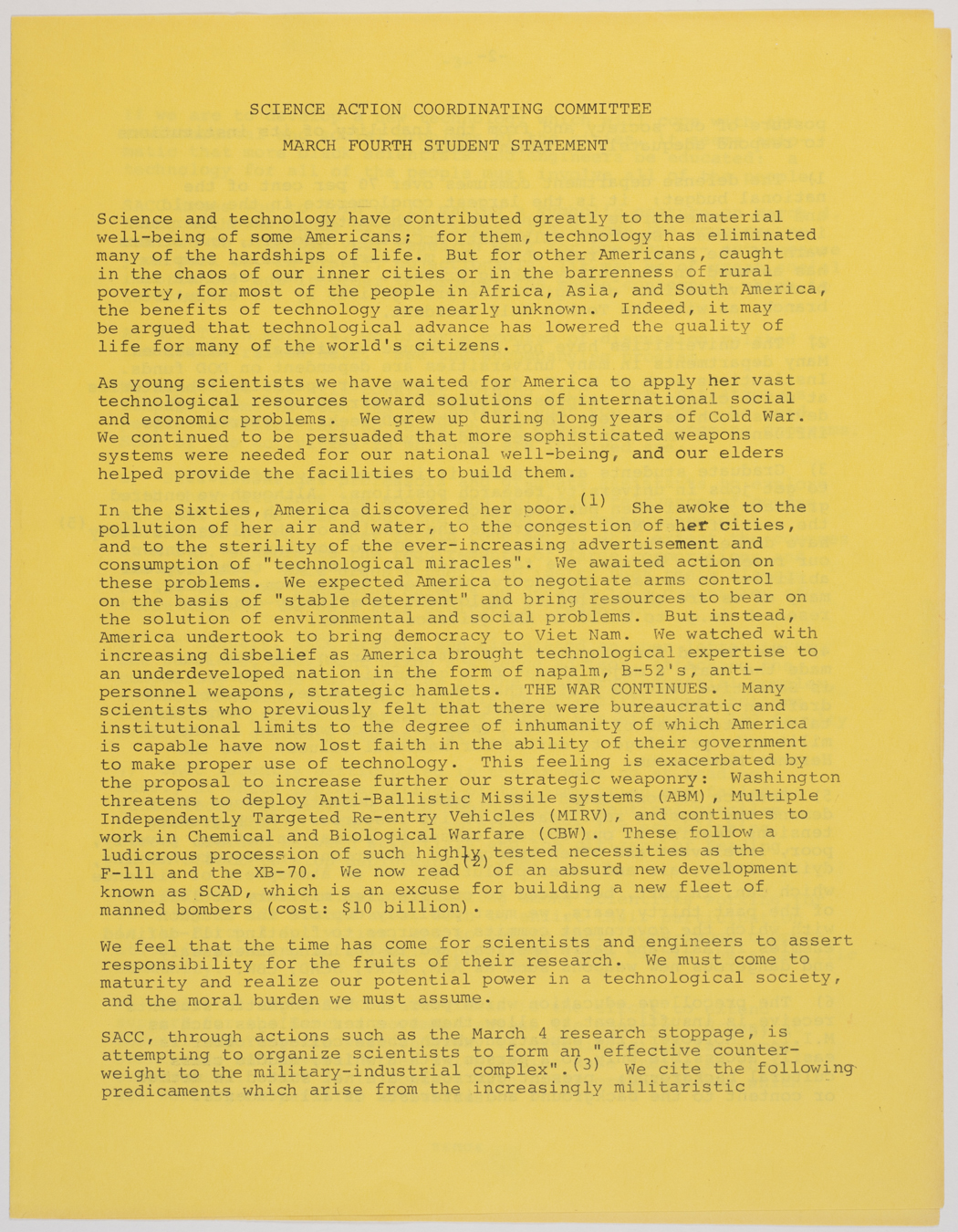 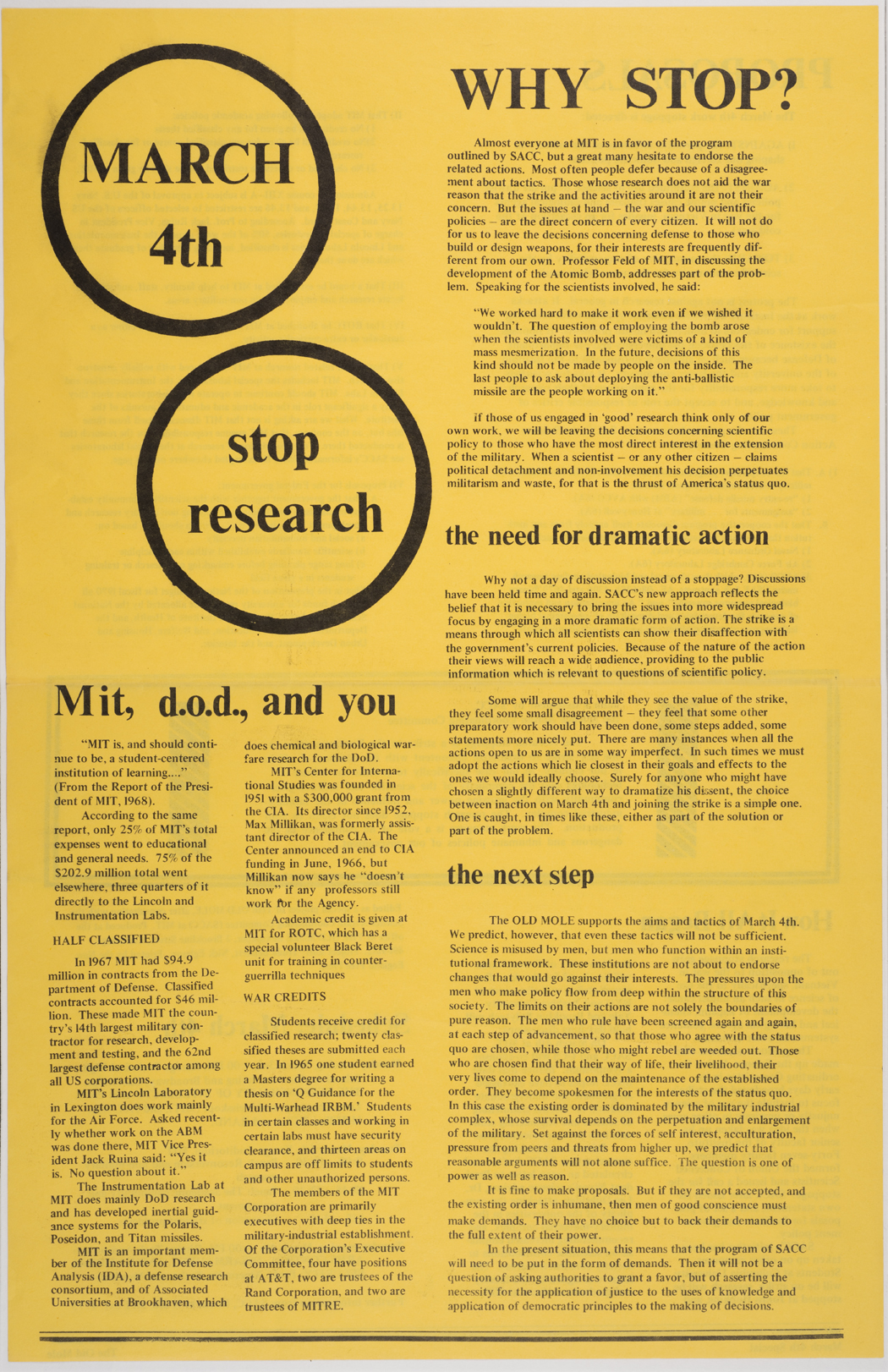 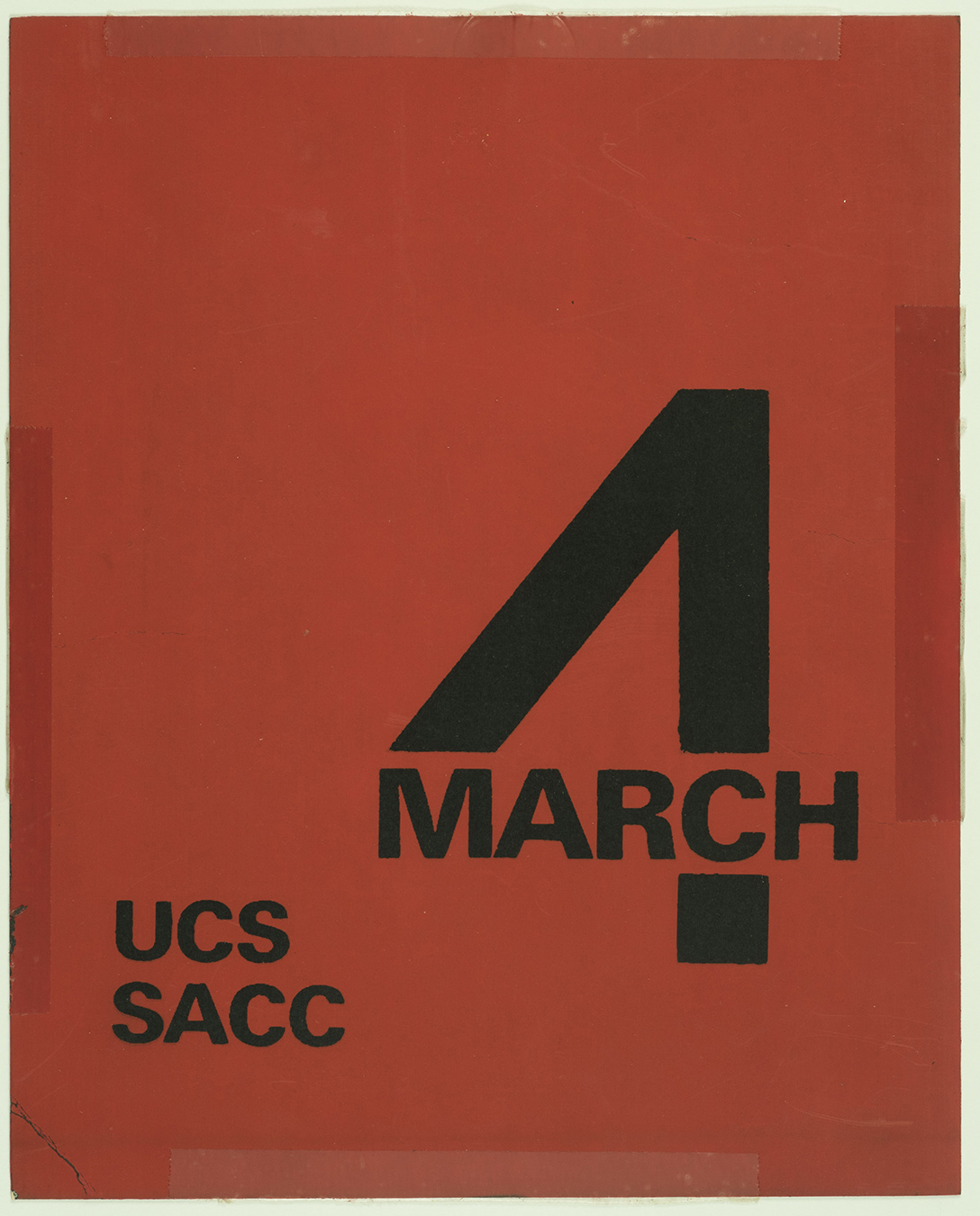 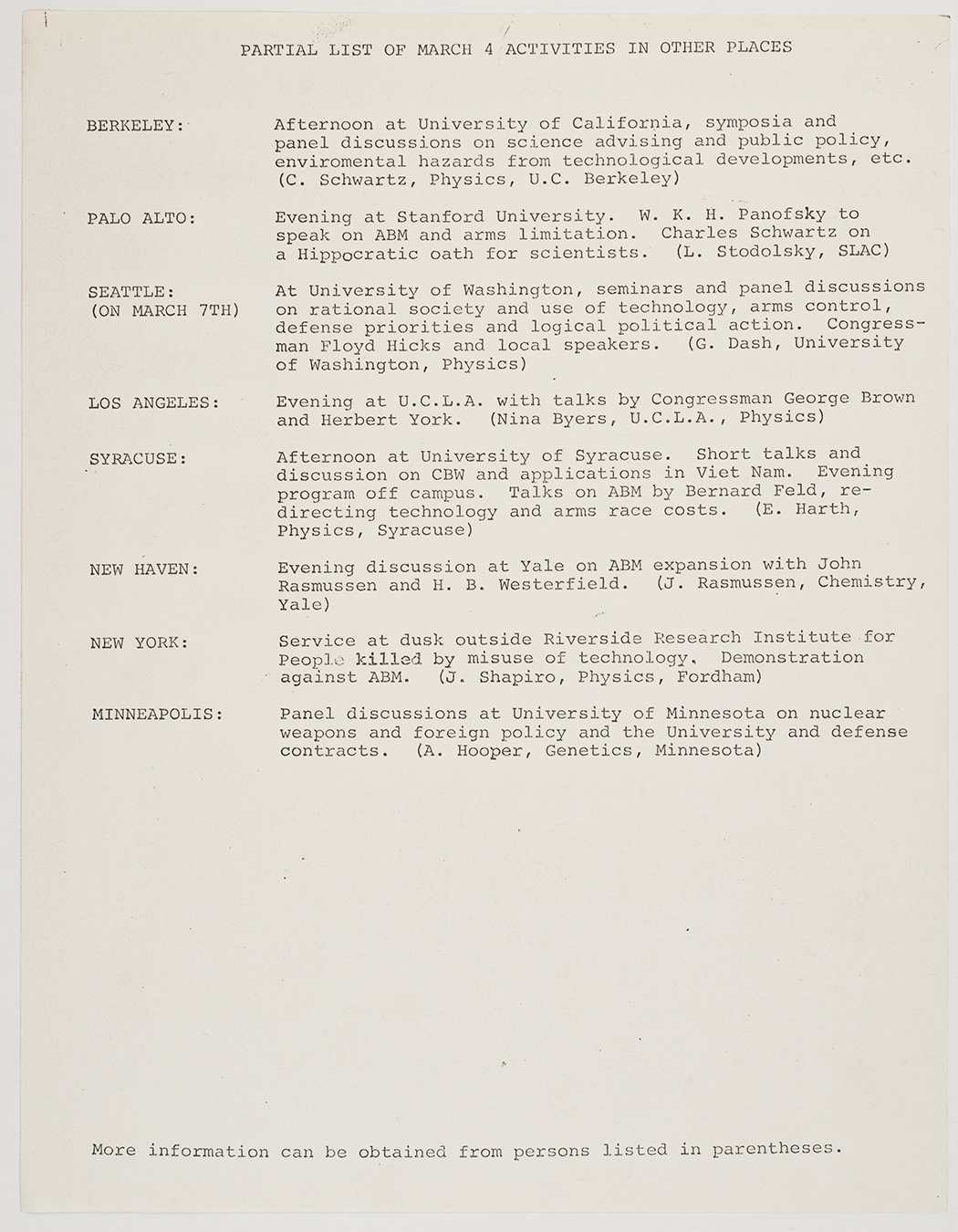 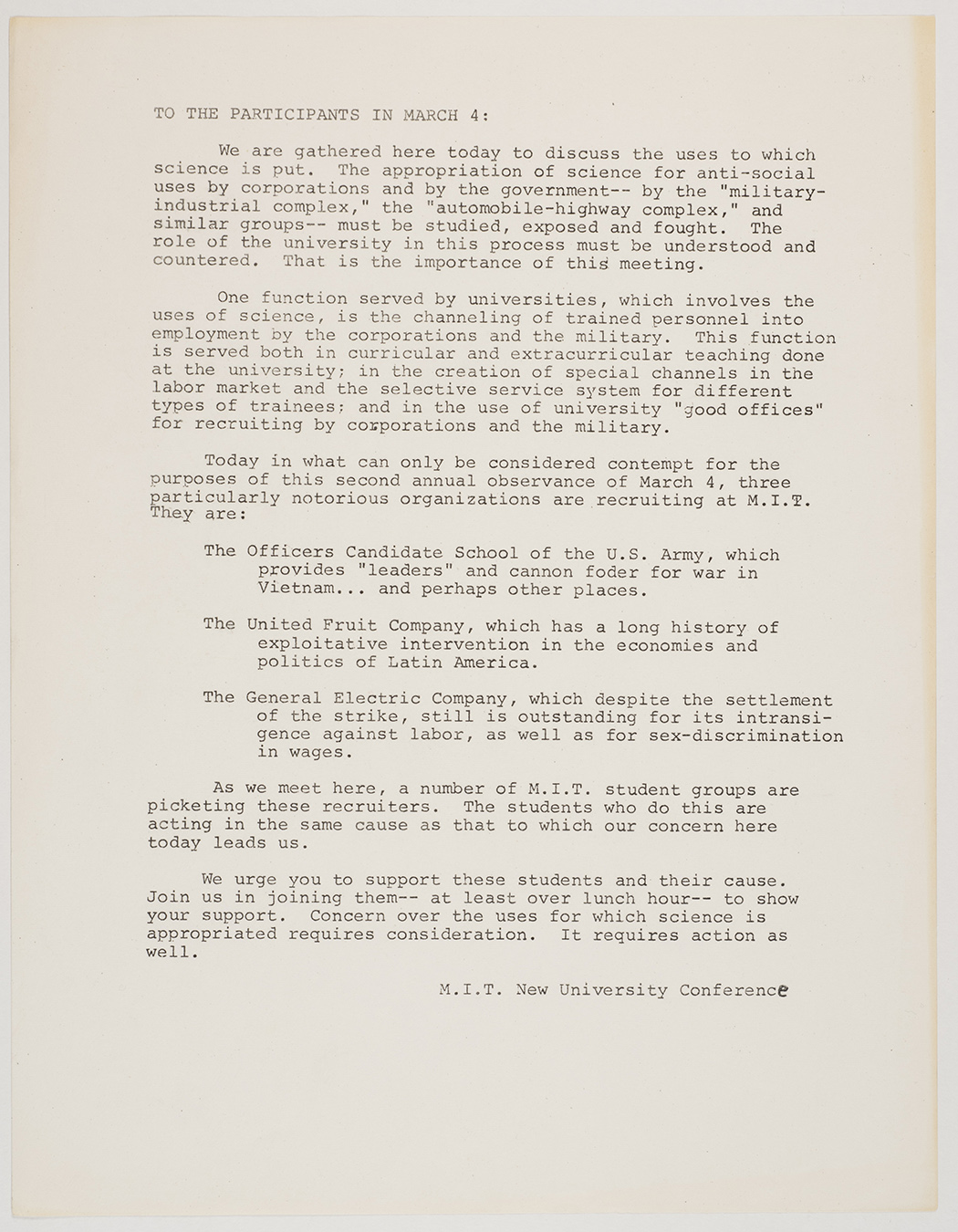 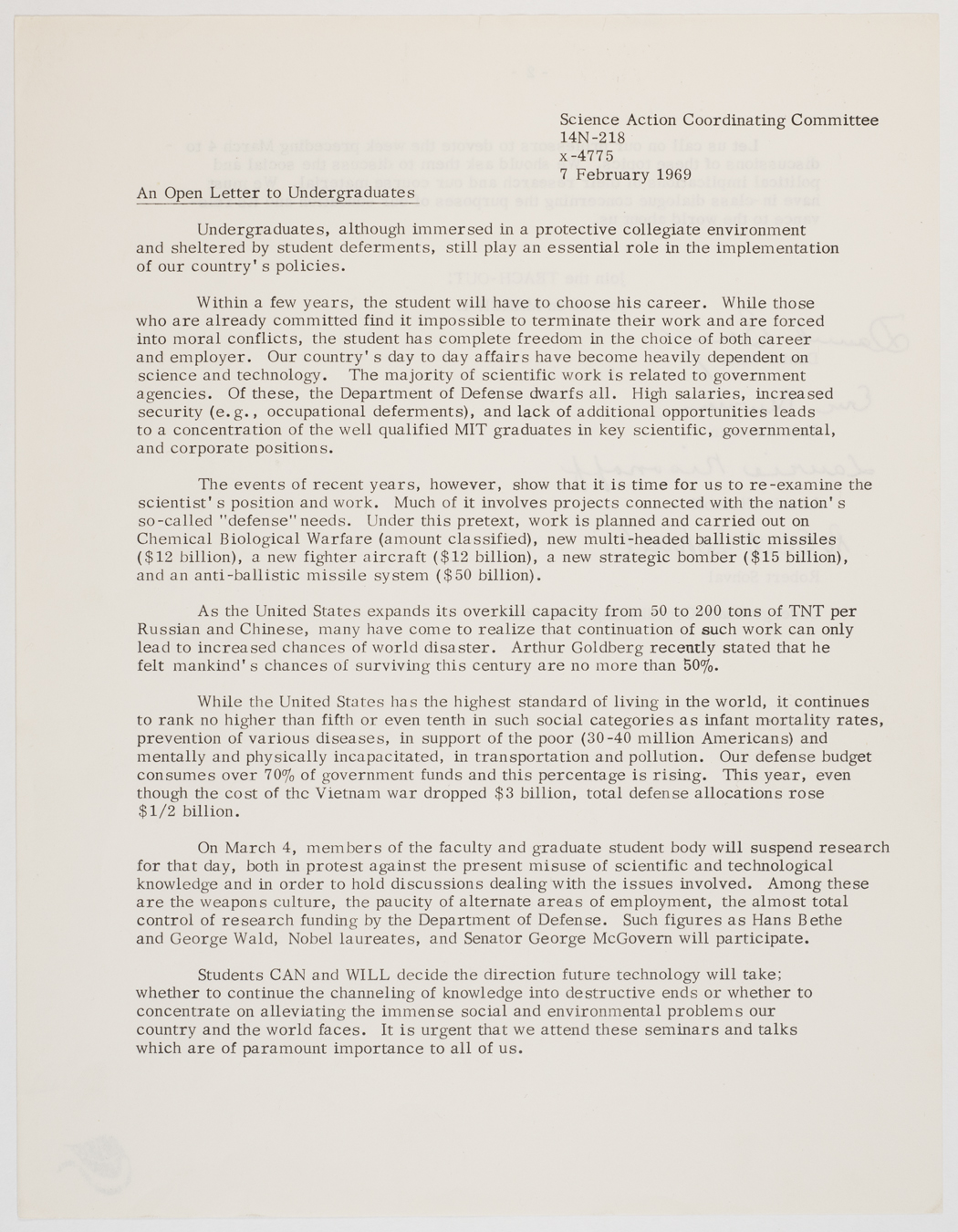 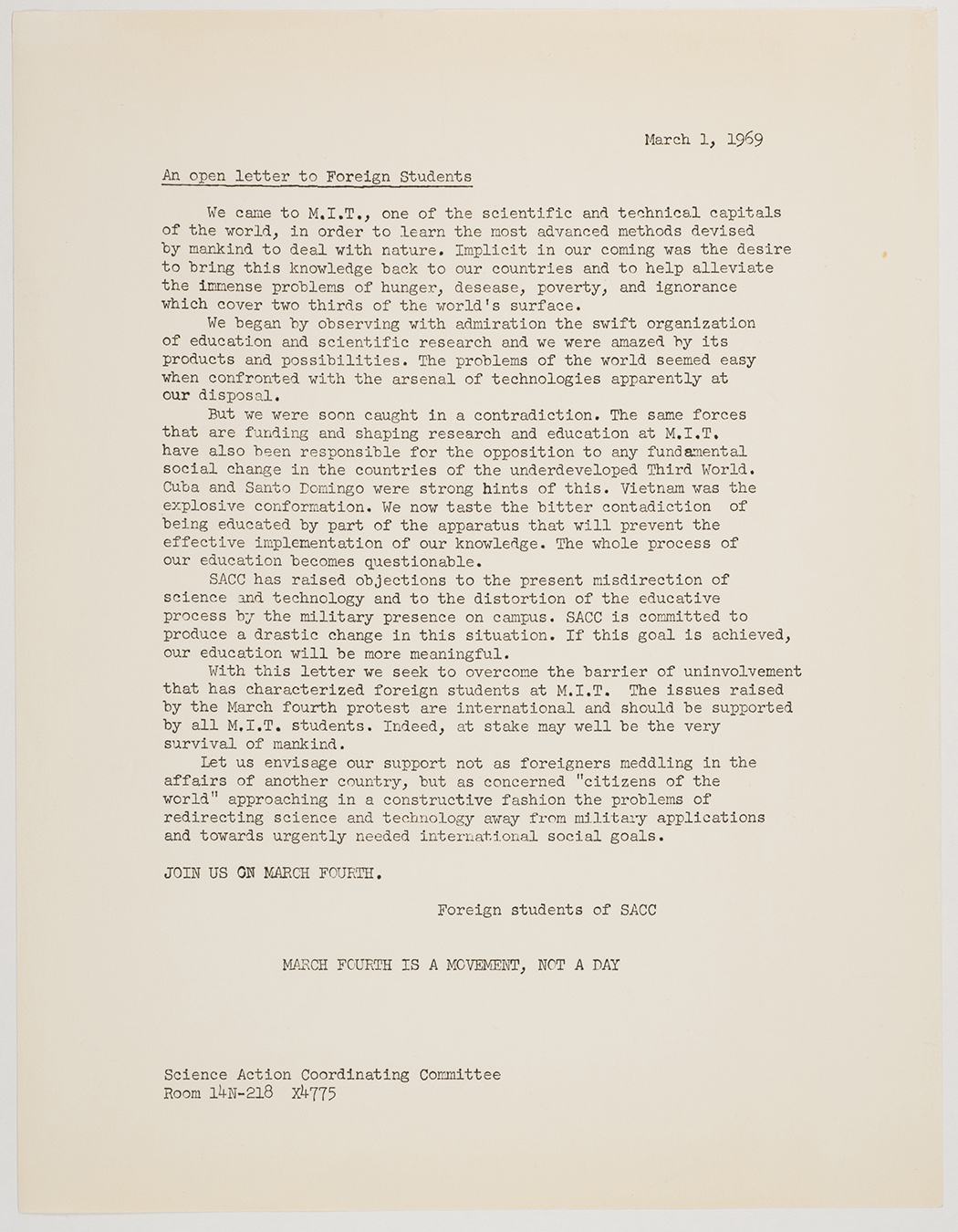 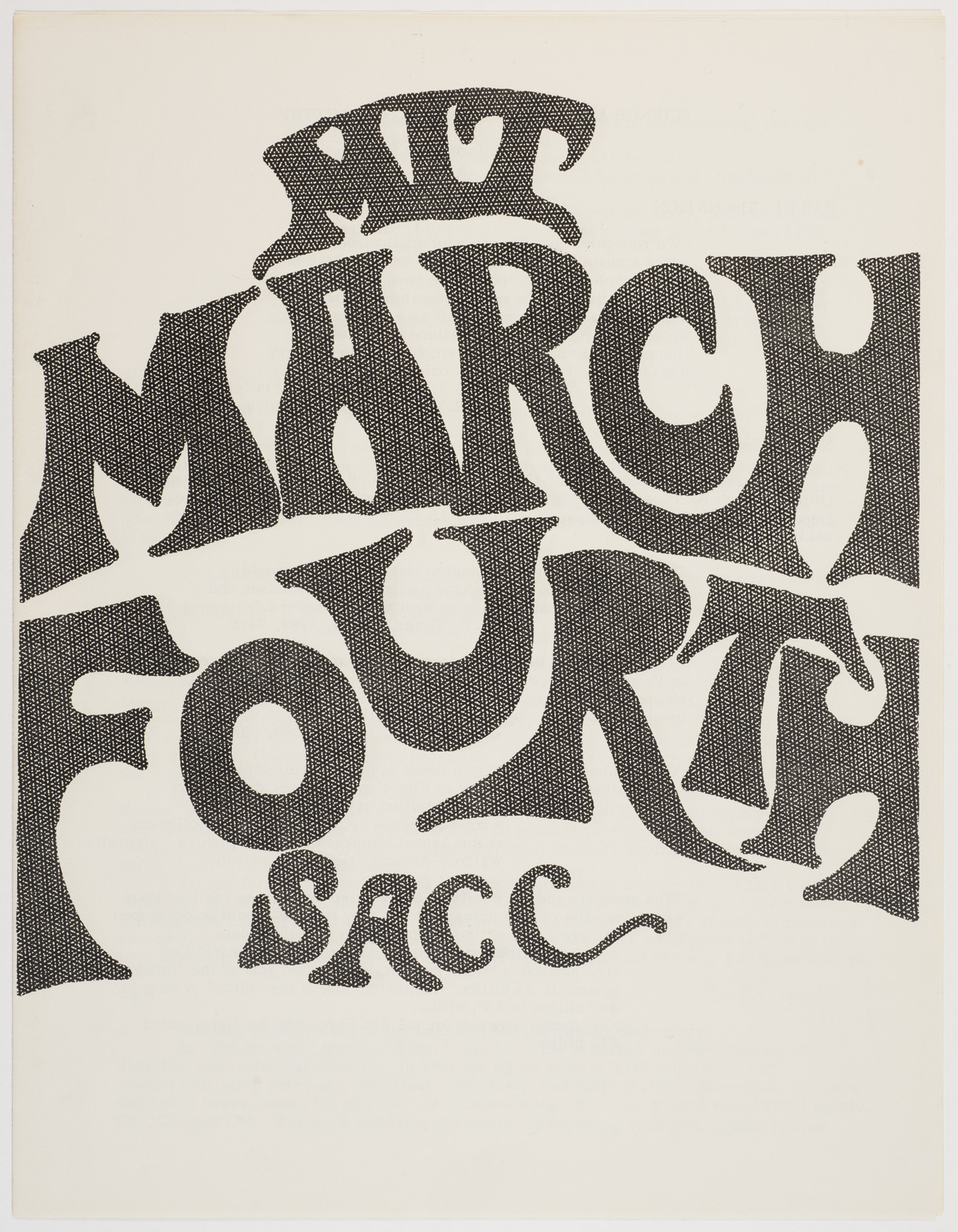 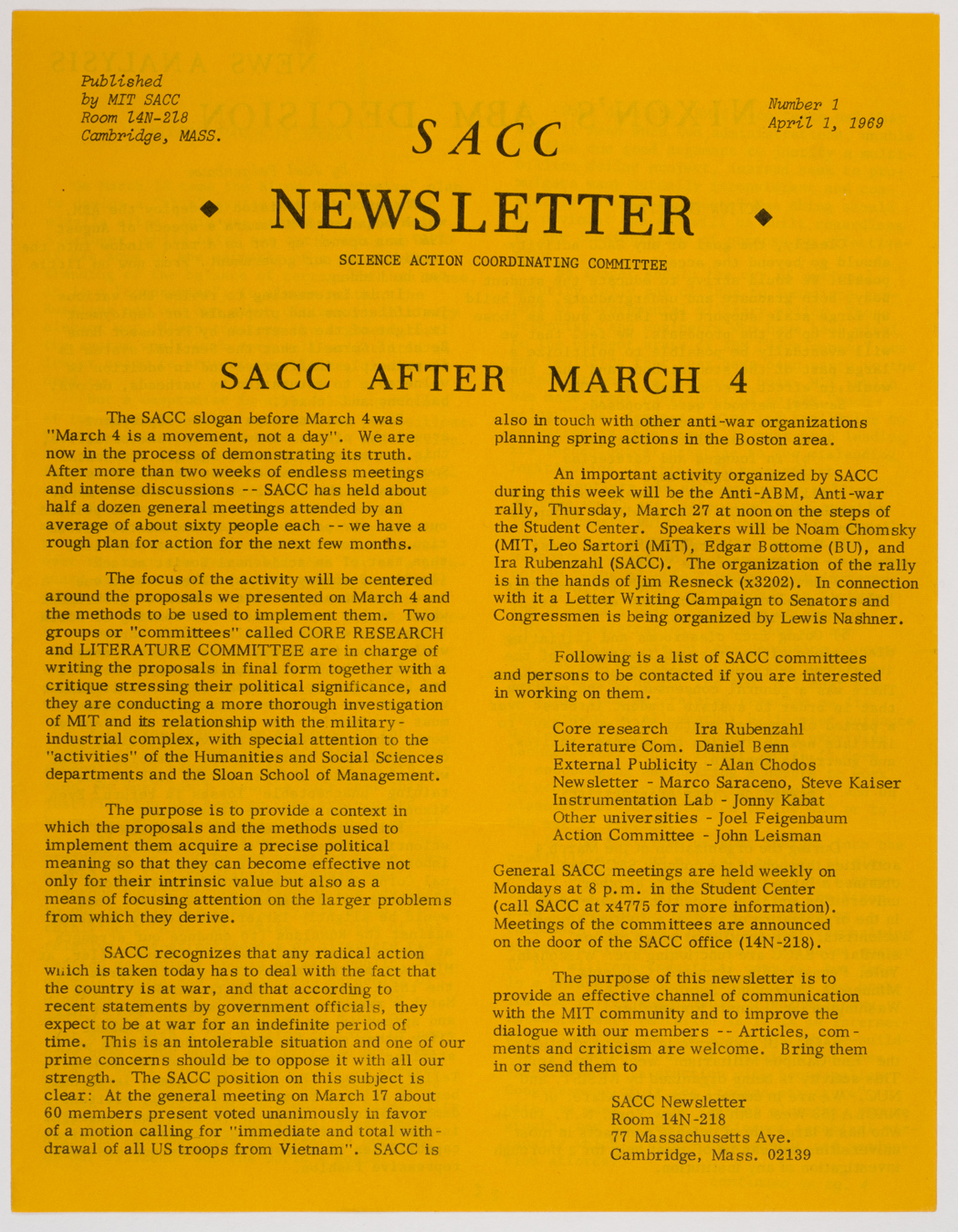 MIT, Office of the Vice President and Dean of the Graduate School, records of Kenneth R. Wadleigh (AC-0378)

Kenneth R. Wadleigh was appointed vice president of the Massachusetts Institute of Technology in 1969. In 1975 the title was changed to vice president and dean of the graduate school. Wadleigh retired from the office in 1983. In 1961 Wadleigh, a professor in the Department of Mechanical Engineering, was named dean for student affairs. During the 1960s this office aided in the organization and growth of student services. In 1969 Wadleigh was appointed vice president and directed special projects including further development of the student residence system. In 1970 oversight of the Registrar's Office and the Medical Department was added to Wadleigh's responsibilities. In 1975 Wadleigh was given responsibility for the Office of the Dean of the Graduate School. By 1980, Wadleigh, now the vice president and dean of the graduate school, was responsible for the Graduate School, the Medical Department, the Division of Comparative Medicine, and the Registrar's Office. As dean of the gradaute school, Wadleigh was responsible for developing graduate student policies, recruiting minority students, and assisting in the procurement of financial support for graduate students. As director of the Medical Department, Wadleigh helped establish health care services for the entire MIT community. In 1983 Wadleigh resigned his administrative responsibilities and returned to the Department of Mechanical Engineering. (from finding aid) 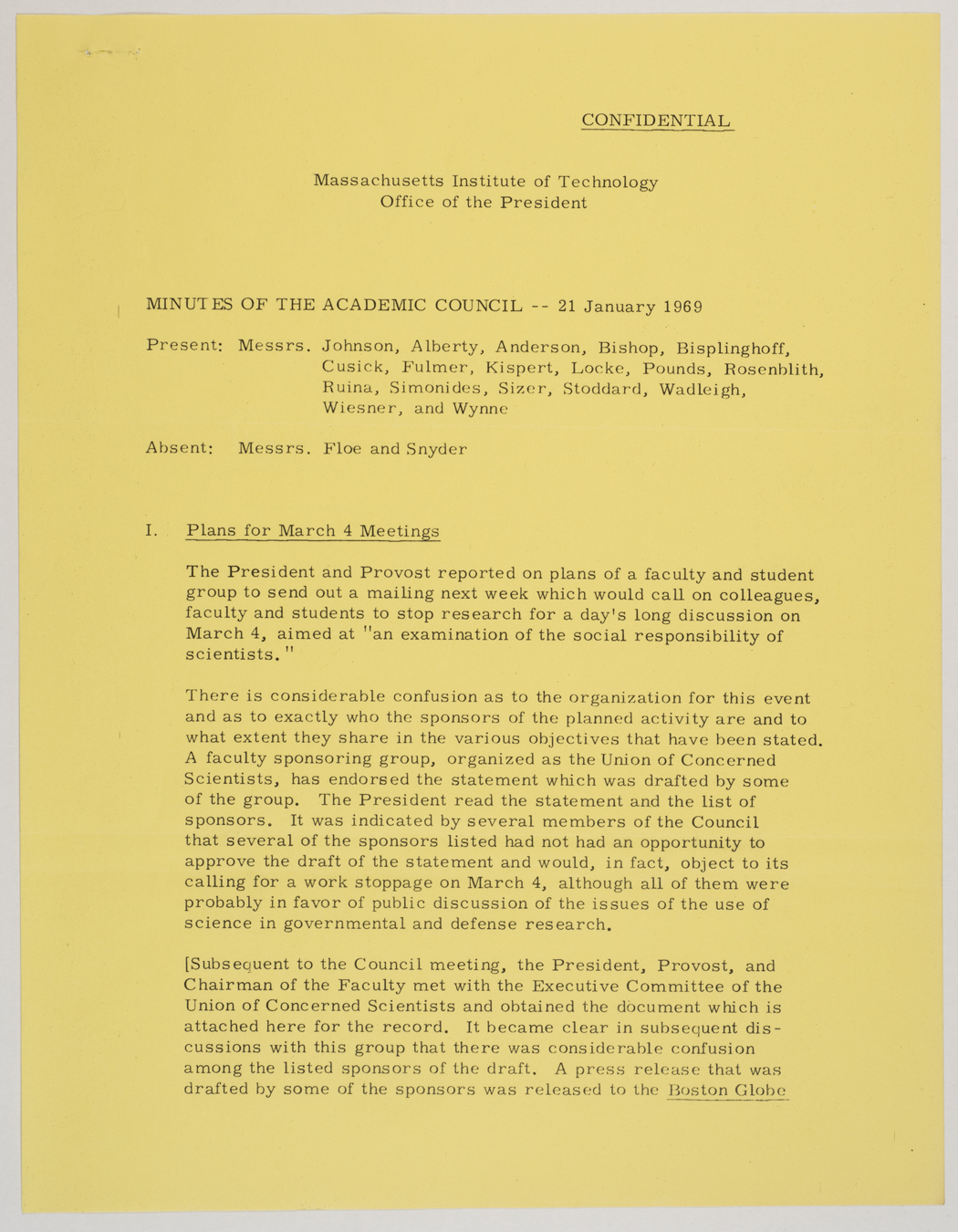 MIT, Office of the Vice President for Administration and Personnel, records of James Culliton, assistant (AC-0416)

James Culliton, 1938-1996, served as assistant to John Wynne, vice president for administration and personnel, from 1969 to 1972. The collection is composed of materials concerning student activism and unrest at MIT. Included are files on rallies, demonstrations, and other events on campus; individual students; MIT student groups; and national or regional student groups. Information on anti-war activities, minority student issues, political issues, bomb threats, and legal actions taken by and against MIT is included. The collection includes photographs of events on campus and of individual students. Also included are photographic negatives, audiotape, and 16mm film. (from finding aid)

The vast majority of the manuscript collections in the Institute Archives consist of personal papers of MIT faculty members. Collections of personal papers at MIT document various aspects of an individual's teaching, research, and professional life. The contents of the collections are wide-ranging and include records such as research notes, course materials, reports, consulting or committee files, drafts of published works, and visual materials. The collections are often donated to MIT at the time of the faculty member's retirement, or as projects are completed and the files pertaining to them become inactive.

The group eventually known as Science for the People originated at the January 1969 meeting of the American Physical Society (APS). Originally named Scientists for Social and Political Action (SSPA), the name was soon changed to include “Engineers” (SESPA) as industrial and other scientific workers joined. SESPA was formed by APS members who felt that the Society was unresponsive to their demands that it formally declare itself against the Vietnam War. In 1969, members of SESPA were involved in the "March 4" panel discussions and talks at MIT. (from finding aid)

Annamaria Toriani-Gorini was a professor in the Department of Biology at the Massachusetts Institute of Technology (MIT). (from finding aid) 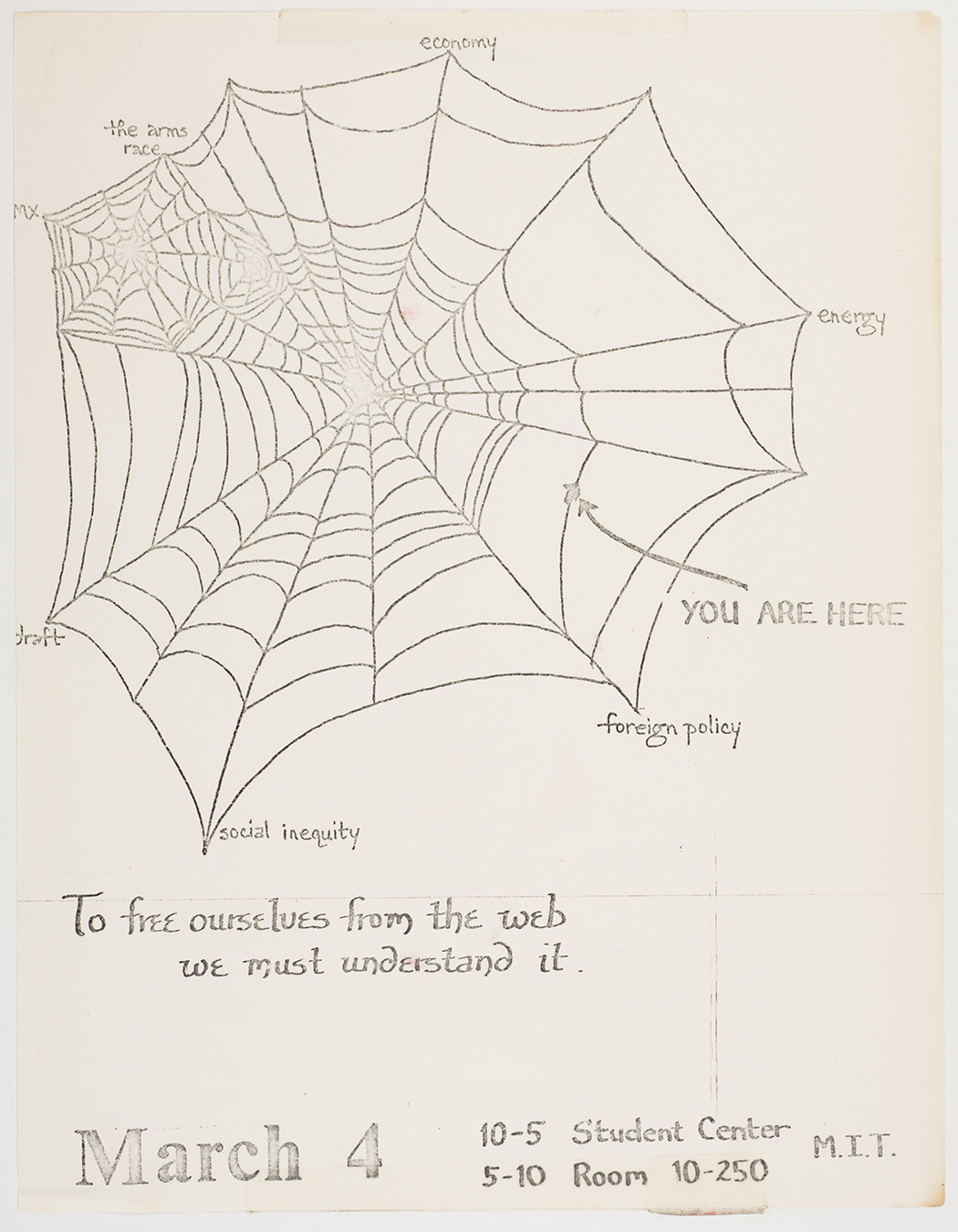 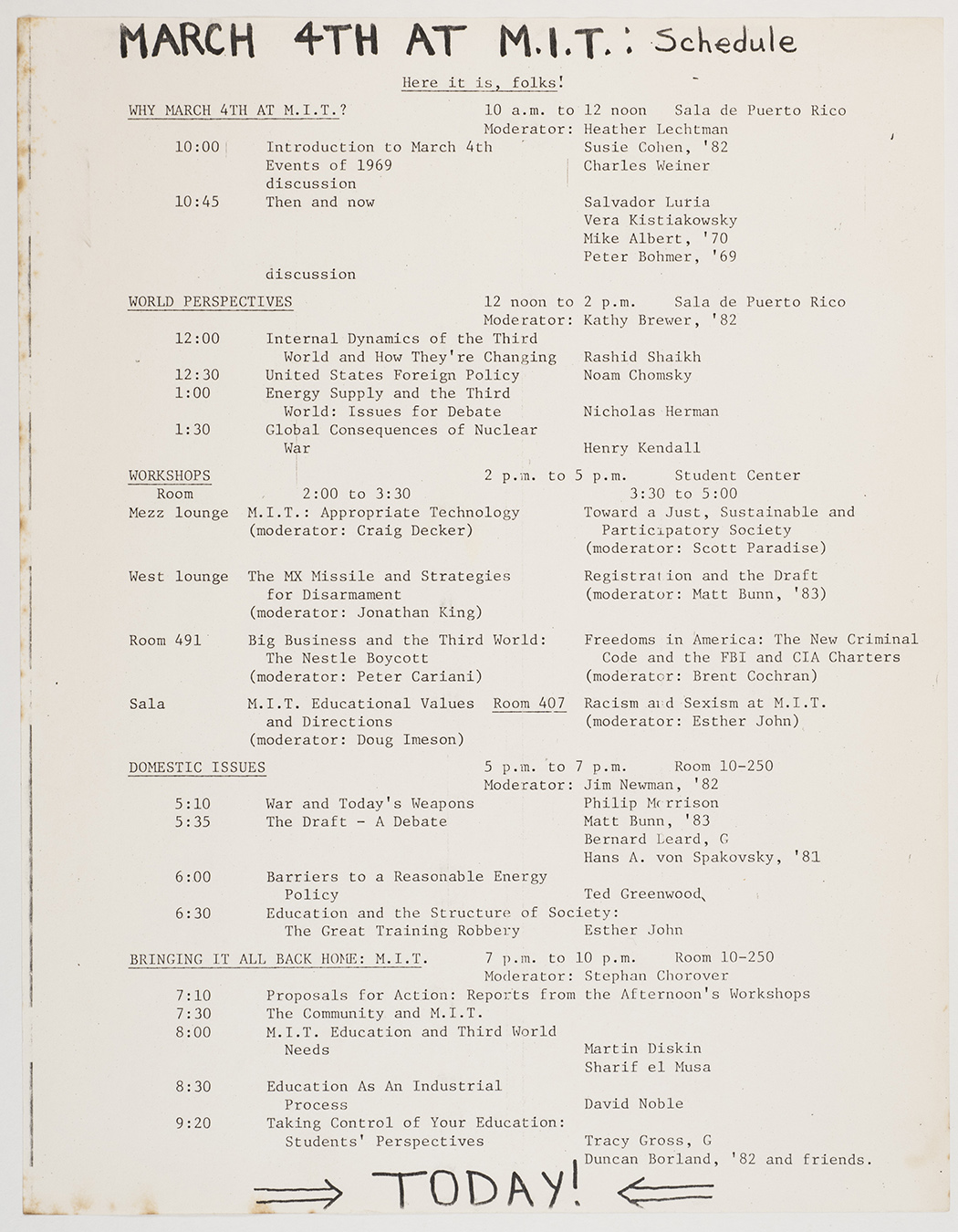 Victor Frederick Weisskopf’s papers include correspondence, meeting agendas, minutes, reports, papers, newspaper clippings, audio tapes and cassettes, films, research notes and calculations, draft manuscripts, lecture and reading notes, and photographs and slides. The papers document Weisskopf’s professional and personal life from the 1920s through 2002. The bulk of the collection dates from the 1960s through the early 1990s, reflecting his role as a physicist, educator, administrator, and advocate of social and political causes. (from finding aid)

These audio recordings need to be reformatted before a researcher can access them.

Hans Bethe, professor of physics at Cornell University, and a Nobel laureate, was a speaker at the Massachusetts Institute panel "Arms Control, Disarmament, and National Security" held on March 4, 1969. Bethe, an opponent of the anti-ballistic missile (ABM) program addressed that topic. March 4 was set aside as for a teach in series of talks and panel discussions that were sponsored by the Union of Concerned Scientists at MIT and in the city of Cambridge, Massachusetts and held on March 3 and 4, 1969. (from finding aid)

For all reference requests, please use the form Ask Distinctive Collections. 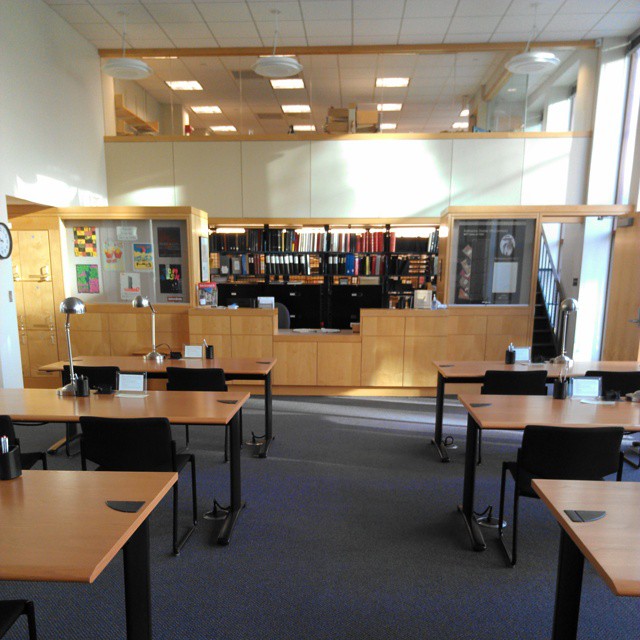