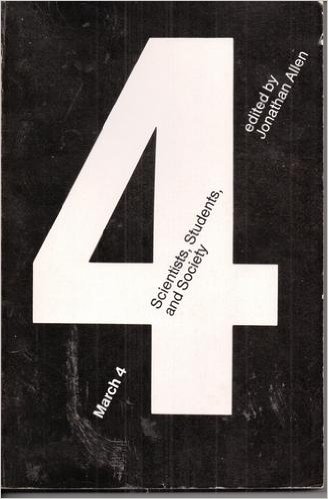 A movement of scientists and students concerned about the misuse of science and the proper relation between science and society, beginning to a large extent at M.I.T. and spreading rapidly to other campuses, emerged as a public force "March 4." Sponsored on the M.I.T. campus by the Union of Concerned Scientists, this was a positive protest and the time was used in intensive examination of alternatives. It differed in other ways from many recent forms of protest. It was planned from the start as a joint effort between faculty and students. And the protesters—students and Nobel Laureates alike—set out to examine what could actually be done—done now or in reasonable time—by taking fully into account the reality and inertia that keep priorities out of balance in the present system. The text of this book consists of an essentially unedited transcription of the talks and panel discussions presented at March 4, thus preserving the intellectual flavor of the event, with its air of spontaneous groping toward mutual understanding among various groups of participants.

The full text of George Wald's moving address "A Generation in Search of a Future" is included. This address, largely extemporaneous, has already had a far-reaching impact in published form through reprints and extracts distributed by several newspapers and magazines. Its influence will be extended now that it is available in the permanence of book form. Two other addresses are also available in the book: "Reconversion for What?" by Congressman George E. Brown, and "Protesting the Draft" by Father Mullaney. The remainder of the book reports the deliberations—the agreements and the disagreements—of five panels. These take up in turn a number of large but definable problem areas: the responsibility of intellectuals; reconversion and nonmilitary research opportunities; the academic community and government; Science Action Coordinating Committee proposals for further action; and the questions of arms control, disarmament, and national security.

These panels were manned by some of the sharpest critics of national policy and some of the most thoughtful students of the American scene to be found today. Among others, including several students, Eugene Rabinovich, Victor F. Weisskopf, Noam Chomsky, Howard Zinn, Salvatore Luria, Francis Low, Thomas Schelling, Franz Schurman, Bernard Feld, Hans Bethe (speaking on the ABM), and Matthew Meselson (on biological and chemical weapons) served as members or chairmen of panels.