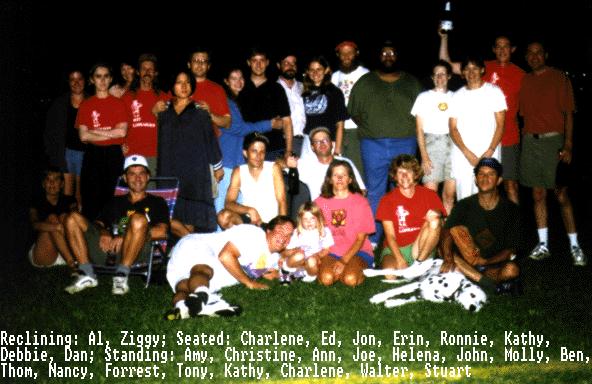 With a song in their hearts, a smile on their lips, and a buzzing noise in their heads, the Library Staff Association's softball standard-bearers, the Bibliotechs, after enduring on Aug. 8 a final Night of the Living Sharp Shooters and emerging victorious with a 9-1 record for the summer, celebrated their 20th season of existence by breaking out the victory donuts and assuming the undisputed championship! of the MIT Community Summer Softball Kentucky Fry League's Extra-Krispy Division. Bibs rule, other teams drool!

And you know that.

At the on-field victory celebration, Forrest Larson was honored as Bibliotech Rookie of the Year, Ed and Debbie Kruzel were cited for their heroic season-long provisioning of refreshments, Ben Brau and Al Davies were applauded for their world-class consumption of the self-same refreshments, and co-captains Nancy Heywood (see ill.)and Walter Powers (see ill.) were co-awarded the coveted Golden Haddock. Captain Heywood combined blowtorch intensity with an instinct for gracious living to turn around the team's indifferent showing of last year - she inspired both with her firm, cool leadership and by personal example, and by inculcating in all Bibliotechs the central tenet of the Bibliotech Creed: that every nuance of the bizarre is a critique of the banal. (Powers, the Oldest Surviving Bibliotech, was gifted, at the championship dinner held later that evening in the Clown Room of Somerville's famous Hacienda Restaurant, with a bepedastaled softball autographed by his teammates, in honor of his 20 years of "showing up." Powers was obviously quite touched, collapsing several times while being assisted up to the dais.)